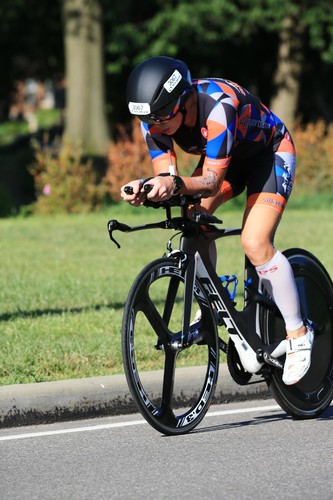 August 20, 2019 - Never competed in Age Group Nationals before and I must say that I was super impressed with the race and competition. I went into the triathlon with the one goal and that was qualifying for ITU Age Group World Championship in Edmonton, Canada for 2020. 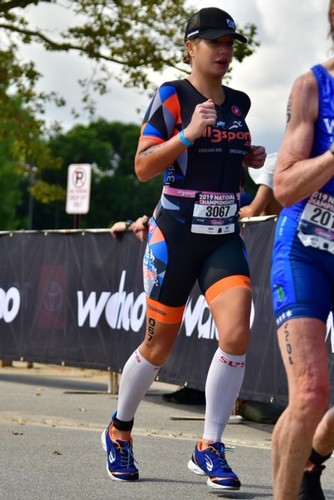 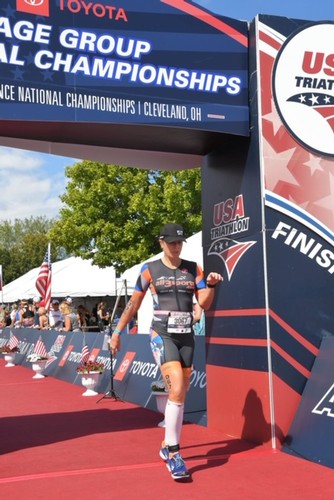 Both Mike and I are coaches with AJ Baucco Coaching and we enjoyed hanging out at the AJBC tent in the race expo.  Got to meet a ton of like-minded people, some new friends and some old friends.  It was a blast, for sure!

The weather leading up to the Olympic distance triathlon was quite blustery!  The waves in the water looked crazy rough and I feared that we might have to fight those waves on race day.  As it got closer, there were mumblings of the swim being cancelled and the race becoming a duathlon.  And although the swim is my weakest sport, I certainly didn’t want the race to be a run-bike-run.  So, come race day, they decided to keep the swim, but shortened it.

The swim was really uneventful for me.  I was in one of the last waves to go off, but that was fine since the swim was shorter.  During my swim, I heard my watch lap itself and so I just turned off my Garmin and raced by feel.

The bike was pretty good.  Definitely not as fast as I could go, but I just wanted to get into a groove and pass as many people as possible without emptying out the tank.  I passed a ton of people, but towards the end of the bike, a speedy group of 40-44 males flew by me.  It was impressive!

Going through T2 was a breeze, even quicker than I expected.  Got out on the run and was running uphill immediately!  Now I know why Coach Ryan McCready had me do all those hill repeats.  :-)  Again, since I didn't have my watch, I had no clue what I was running.  I just kept trying to pass people and just staying in the top 18 to qualify for Worlds.  I felt pretty confident that I had accomplished my goal.

Got to the finish, which was really neat!  USA Triathlon did a great job making you feel like a pro!  I'm happy to say that I will be competing for Team USA in 2020!  I'm thankful to all my great training partners, my coach, and my husband for helping me meet my goals.