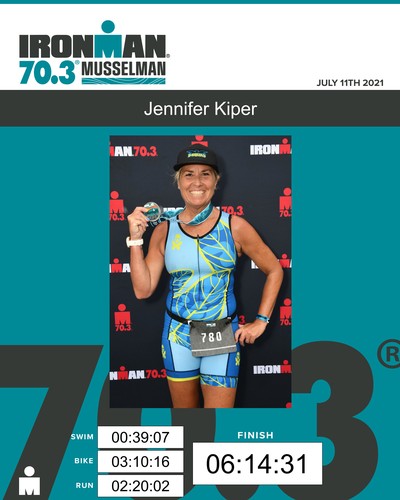 So I have been all over the place on what I want my tri season to look like for 2021.  I did a Oly at deer creek and it was a million degree and I din't swim well.  My racing partner that made me sign up for mussleman back out so I was on my own.  I don't really follow a specific plan and I was just going to push the run and see where I was at.  I had times I wan'ted to do on the bike and the swim and I came in under those times so I wanted to go for it on the run.  I have battle leg pain for years and was hoping I was going to run a pain free race.  That didn't happen but I was able to run my best half (tri) time since I started doing tri's.  It was cooler westher with a light rain making the swim a bit choppy ( which i love), a big wind on the major hill climb which I don't love but there was a tailwind on the turnaround so I did you that to my advantage.  The run was a 2 loop course that was filled with people which was awesome.   I am happy to say I placed 34th in my age  which is my highest place.  6:14 finish time.  I think I will push for under 6 next race.